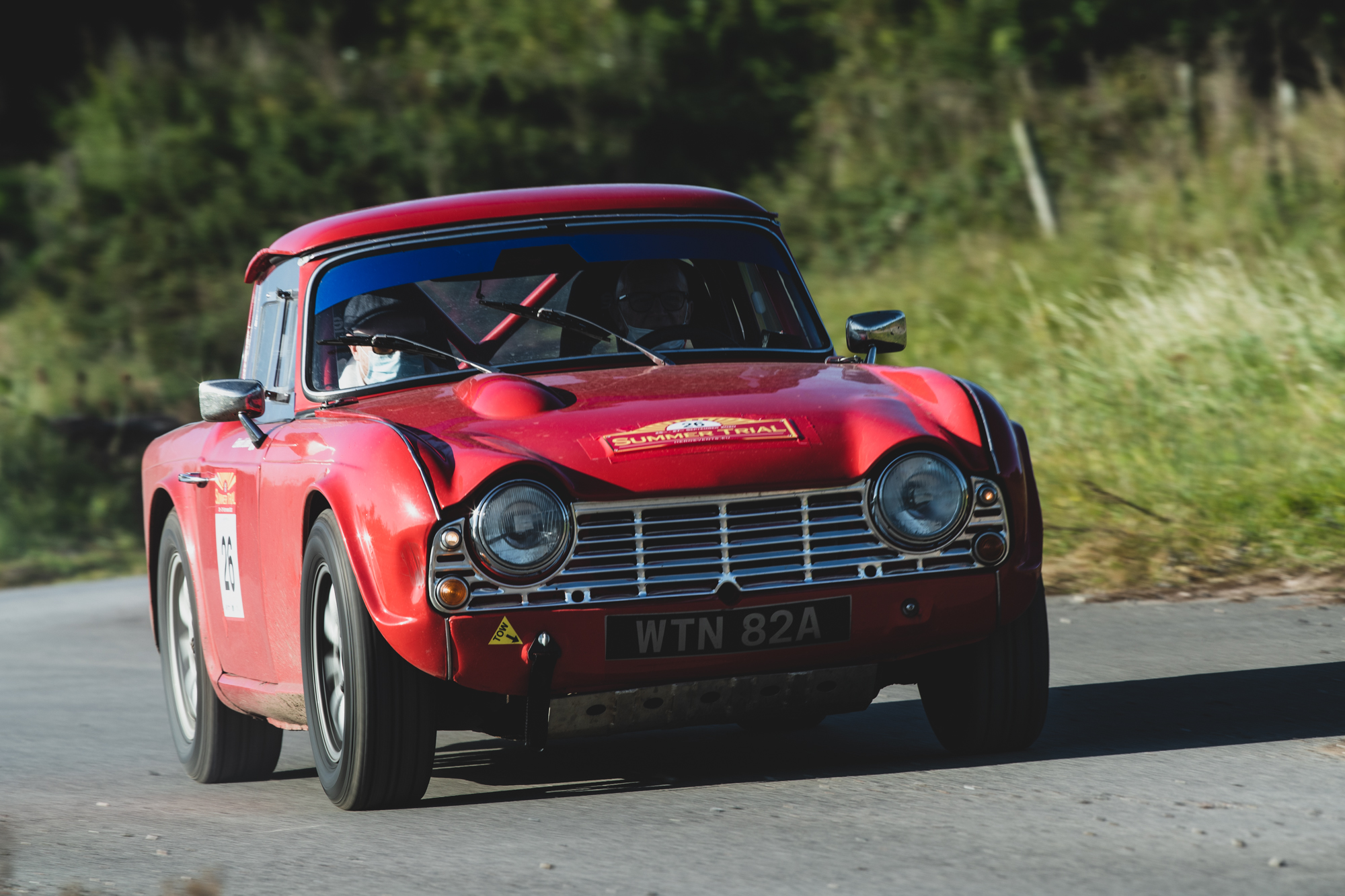 
The father and son team of David Liddell/Edward Liddell took their maiden rally win on HERO’s first multi-day event of 2020. Based at Telford, the Trial followed on from two previous events run by HERO under CoVid restrictions. The Trial offered crews three days of competition in the Shropshire countryside.

With one late withdrawal, forty-one cars took the Friday lunchtime start. They faced four regularities and three tests in the Shrewsbury/Oswestry area.

The opening two sections were designed, dependent on the crews’ experience, to blow the con webs off or give a gentle introduction to the art of regularity driving/navigating. By the end of them Angus McQueen/Mike Cochrane (BMW 323i) held a ten second lead over Chris Pearson/Rob Faulkner (Volvo 122 Amazon). Liddell/Liddell were in third at this point, having been penalised for a line fault on Regularity 2.

Three Masters crews were taking part; they were fighting for the class win amongst themselves as they weren’t eligible for the overall awards. It was 2018 HERO Cup Winners who led after two regularities; they had dropped just five seconds and were four ahead of 2019 Summer Trial winners Stephen Robertson/Thomas Robertson. Stephen Owens/Nick Bloxham were on 22 seconds, having been penalised ten seconds for a Timing Point line fault.

Two tests at the Rednal Kart Track added excitement for the drivers. As with all HERO events, the tests were penalised on a class improvement system, where the fastest car in a class receives 0 penalties, while the second is penalised 2 seconds and so on up to a maximum of 10 seconds. A wrong test adds 30 seconds to a crew’s total.

James Holt/Archie Holt (BMW 325i) were fastest on the first and second fastest on Test 2. Bloxidge/Canavan were the quickest on Test 2. David Moyle/Stephen Hardwick (Datsun 260Z), on the driver’s first rally, were among a number of crews who got a wrong test; this dropped them from 6th overall to 17th place.

Regularity 3, with six timing points, used the lanes between Oswestry and Wem. Most crews reported being held up by school buses, farm traffic and horses. Liddell/Liddell had a 0 and 2 on the tests to move into second place. McQueen/Cochrane had added 14 to their total on the tests, but on the following regularity were never more then three seconds off their target and 11 seconds ahead of Liddell/Liddell at the section end. The latter crew had blotted their copy book by being 14 seconds early at the second timing point.

The final regularity of the day took crews back towards Telford; it had four timing points and a sneaky secret check towards the end; the check didn’t catch out any of the crews. The best performance over the section was taken by Per Neville/Peter Neville (Volvo 144). They dropped just three seconds and this moved them into second place, 12 seconds behind McQueen/Cochrane, who still led. The competition was so close that another 14 second penalty dropped Liddell/Liddell to fourth, behind Robert Robinson/Clare Grove (Rover 2000TC).

Robinson/Grove were to end the day in seventh place as they were adjudged to have completed a wrong test on Test 3, a newly discovered venue over an airstrip near Osbaston. John King/Tracey King (Triumph Dolomite Sprint) were fastest of the non-Masters; Paul Bloxidge being the quickest of all. The Holts were once again on the pace, one second behind the Kings.

Competitors arrived back at the Holiday Inn with McQueen/Cochrane still in the lead, although Neville/Neville were now only six seconds in arrears as they were fastest in the class over the test. Liddell/Liddle were back to third seven seconds off the runner up spot. Peter Fletcher/Janet Fletcher found themselves in last place having had to cut the last sections as their Jaguar XK120HDC developed a coolant leak. They tried to effect repairs overnight, but were unable to start Day Two.

Saturday held a full day of rallying; eleven hours between start and finish, with eight regularities and a total of 32 timing points. There were no tests. The first regularity ran up and down Wenlock Edge and had five timing points. The section saw the battle for the lead get closer; the top three positions didn’t change, but McQueen/Cochrane, Neville/Neville and Liddell/Liddell were now separated by just five seconds.

By the time that the crews arrived at the morning coffee halt at Broomfield, Neville/Neville and Liddell/Liddell were tied for the lead, with McQueen/Cochrane now 13 seconds in arears. On the next regularity Liddell/Liddell hit their time exactly at two controls and were just three seconds late at the other. In contrast, Neville/Neville, accumulated 49 seconds, and fell to eighth. McQueen/Cochrane were in second, but had a recovering Chris Pearson/Rob Faulkner just one second behind in third.

Regularity 4 was a major test of navigation as it utilised the lanes to the south-west of Haye Park Forest. The second timing point proved quite elusive and 16 crews picked up the maximum one minute penalty for being late there; these included Neville/Neville and McQueen/Cochrane. This left Liddell/Liddell with a lead of 21 seconds over Pearson/Faulkner. Piers Barclay/Nicholas Harries (Triumph TR3), who had been moving up the field after being in eighth place overnight, were now in third.

After a lunch halt at Leintwardine, the route moved to the Welsh border area, although never actually venturing into the Principality. The lead positions remained unchanged after Regularity 5, but Pearson/Faulkner dropped a minute at the first timing point on Regularity 6 and fell to sixth. By the end of this long section, Liddell/Liddell had extended their lead to 51 seconds. Barclay/Harries were in second. Andy Simpson/Roger Bricknell (Mini Clubman GT) had picked up a minute penalty at a timing point on Friday, but were now recovering and moved up to third at the end of Reg 6. Also regaining places were erstwhile leaders, McQueen/Cochrane, who were now fourth.

Regularity 7 took competitors up and over the Long Mynd. Tourist traffic was a problem here and many crews got held up by dawdling sight seeing drivers. Previously on the Summer Trial a Joker system had been used. This allowed competitors to have their largest lateness penalty of the event reduced to five seconds; this was to allow for instances where they had been delayed by non-competing traffic. However, Motorsport UK objected to the system, stating that it contravenes their rules. They would only issue a permit for the event if the Joker system were removed. Without the Joker, affected crews simply had to grin and bear the delays.

McQueen/Cochrane had by far the best run on the Regularity, picking up only 11 seconds; this moved them back to third place. Barclay/Harries had the next best performance, dropping 22 seconds and narrowing the gap on the leaders to 12 seconds. Both Bloxidge/Canavan and Owens/Bloxham were delayed on the section and this allow Robertson/Robertson into the lead of the Masters Class. However, on Regularity 8 the Robertsons wrong slotted and picked up a minute penalty at TP2/8D, the last of the day, this put them at the back of the class.

The top three positions remained the same over the last regularity, the order being: Liddell/Liddell; Barclay/Harries and McQueen/Cochrane. The latter having again taken the least penalties of any crew on the section that ran from Church Stretton to Cressage. Per Neville/Peter Neville were now back to fourth. Andy Simpson/Roger Bricknell should have been in that position, but a flat battery meant that they had to have a tow into the overnight halt. This cost them a two and a half minute penalty and they fell to fifteenth overall.

The final day started at 08:00 and had the first car back at the final Main Control at 13:00. It contained four regularities and three tests. The former were likely to be decisive as Clerk of the Course, Guy Woodcock, had been making the navigation progressively harder throughout the rally.

The opening regularity started at the gates to Weston Park and headed north, with five timing points along the way. The big losers on this section were Robert Robinson/Clare Grove, they had been in fifth place overnight. They got confused by the navigation and eventually had to cut route to ensure that they arrived at the morning coffee time control within their maximum lateness. David Liddell/Edward Liddell extended their lead as Piers Barclay/Nicholas Harries ended the regularity just five seconds ahead of Angus McQueen/Mike Cochrane.

Paul Bloxidge was fastest once more on Test 3/1, which was near Seighford. Michael Pedley/Ciara Pedley, competing in an Arrive & Drive Golf, were on their first HERO rally and were second fastest here, with James Holt/Archie Holt close behind.

James Darwent/Sarah Darwent, in their immaculate Alfa Romeo Guilia Sprint GT, had been in ninth place, when they had to retire as the Alfa lost its brakes. Robert Hendy/Michael Joyce also went out at this point as their Saab 96 V4 suffered a broken gear linkage. Amanda Johnson/Andy Ballantyne were also struggling with mechanical problems; the gearbox on their Mini had been playing up since Saturday afternoon. By the middle of Sunday morning they had lost most lower gears, plus reverse. Despite the problems they got to the Finish in 17th place.

Over the last regularities and tests, the father and son team of David Liddell/Edward Liddell pulled away from the field and came home almost two minutes ahead of their nearest rivals. At the Finish Edward found that he had also won the Clock Watchers Award, given to the navigator who had accumulated the fewest penalties on the event’s 15 regularity sections.

In contrast the battle of the runner up spot was ferocious. With just the final test remaining, McQueen/Cochrane and Barclay/Harries were tied on 5m31s. The latter crew were fastest in their class on Test 3/3, so added nothing to their total. Meanwhile McQueen/Cochrane, against stiff opposition, were fifth in class, which gave them a six second penalty and pushed them down to third place.

Having been in the top five on all of the six test, James Holt won the Test Pilot Award. Paul Bloxidge/Ian Canavan triumphed in the Masters Class, finishing almost two minutes ahead of Stephen Owens/Nick Bloxham.