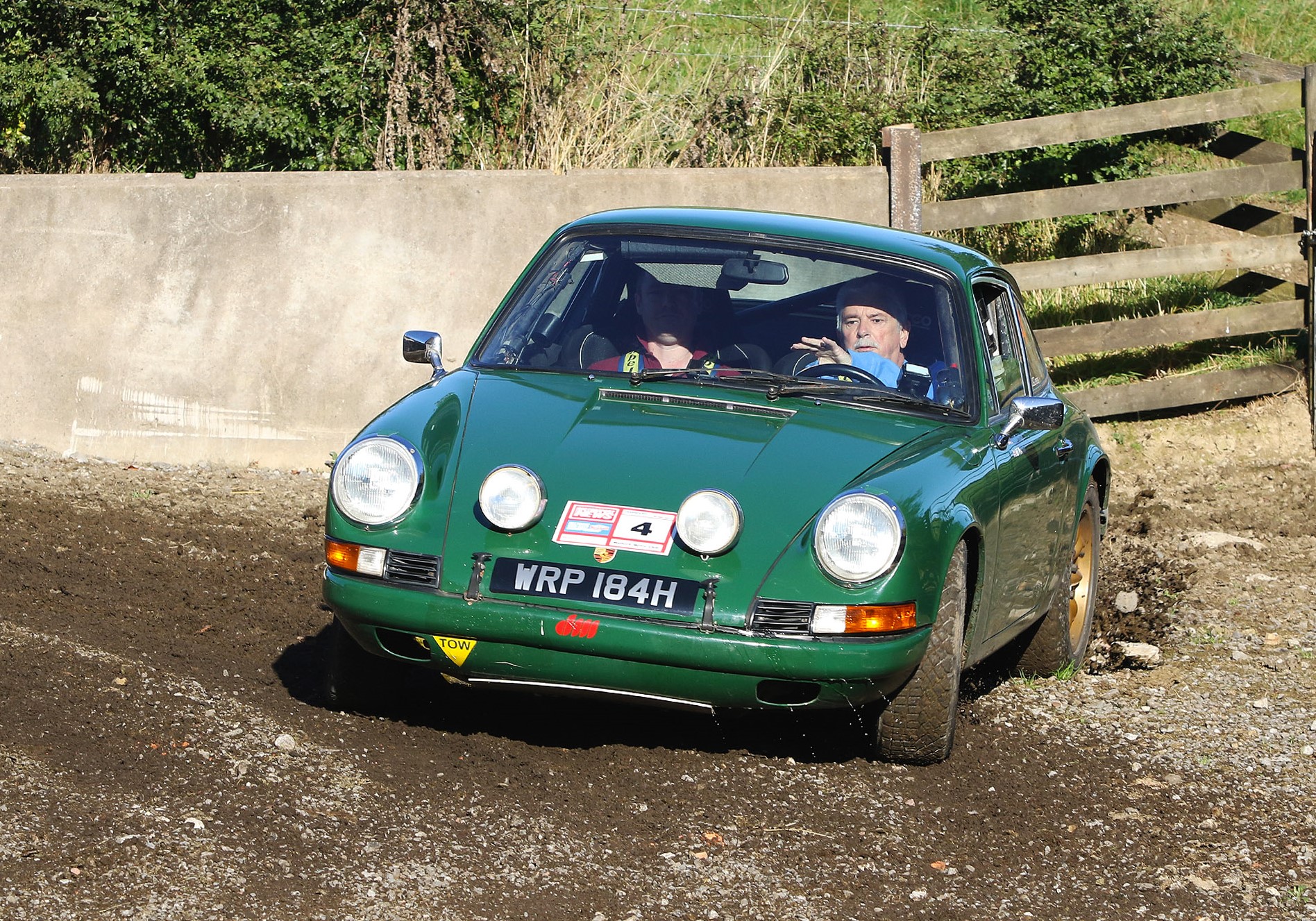 Clerk of the Course: Martin Phaff


The final round of the HRCR Clubman Championship was the Dansport Historic, it was the first running of Matlock MC’s long standing road rally as a classic event. The Dansport was based at Chesterfield and feature a Saturday evening leg, as well as the more usual full Sunday of tests and regularities.

A disappointing entry of just 47 cars took the start at 18:00 from the Peak Edge Hotel; the venue also being the site of the Finish the following day.

A long run out took competitors to the start of the first of two regularities run in the dark. The opening section was 30 miles long, it included eight timing points and a passage control. It started at Strines and utilised the maze of lanes to the north-west of Sheffield, including a run around the notorious Wigtwizzle.

Paul Crosby/Ali Procter made clear their intentions as they dropped 10 seconds less than any other crew on the regularity, giving them a lead that they weren’t to lose. Dan Willan/Andy Pullan and Paul Dyas/Martyn Taylor shared second place.

The final timing point, on the triangle at 2625/9755, caused a few of the crews a headache. Most notably Andy Beaumont/Andrew Fish and Ken Binstead/Sarah Binstead collected wrong approaches here.

Rowena Purdy/Ric Hands and Tim Tordoff/Ian Frazer were early retirees; the latter having fuel issues on their immaculate Sunbeam Ti. Darren Duesbury/Sebastian Hillier also left the fray in their Sunbeam Tiger before the end of the section.

The shorter second regularity was 11 miles in length and contained two timing points and a passage control, plus a secret check. It started near Oughtibridge and used the lanes around Dungworth. It took competitors to the Supper Halt at the Three Merry Lads on the outskirts of Sheffield.

The section posed little problem for the top crews; Willan/Pullan and Matt Warren/Ryan Pickering dropped just one second. Warren/Pickering were well down the order having wrong slotted and picked up a maximum one minute penalty at the fourth timing point on the first regularity.

Crosby/Procter picked up three seconds on Reg 2, so arrived at the Supper Halt with a lead of eight seconds over Willan/Pullan. There was a tie for third, with both Dyas/Taylor and Mike Vokes/Matthew Vokes being 21 seconds off the lead. Richard Isherwood/Ian Canavan were the only other crew with under one minute of penalties in fifth place.

The restart on Sunday morning was from the Casa Hotel in Chesterfield. Day 2 opened with two tests at Walton Lodge, these were followed by a short regularity, with three timing points, before crews returned to Walton Lodge for two more tests.

The Dansport was trialling a new scoring system for the tests; it was based on a car’s category. The fastest car in a category would receive zero penalties, other cars in the category would be awarded their time, minus the fastest category time. This was an attempt to level up the field between the oldest and newer cars.

On the first four tests the new system seemed to have minimal effect as the fastest category times were within a few seconds of each other.

Regularity 4 took the route west to Darley and included three timing points. The bright weather had brought out a large number of walkers, cyclists and horse riders, these impeded the cars as they wound their way through the lanes. Willan/Pullan were affected and lost fifteen seconds towards the end of the section. They fell to 20 seconds behind Crosby/Procter.

This section saw the retirement of Mick Valentine/John Thornley; their clutch cable snapped, bringing their Escort RS2000 to a halt.

Unusually Regularity 5 had a test in the middle of it. After two timing points there was a test at Oddo in Darley Dale. Crews then took their time from the Test Finish as their restart point for the remaining two timing points.

Crosby/Procter were fastest in Category 2 on the test, so didn’t add to their total at that point, but Willan/Pullan were beaten by ten seconds in Category 1 by the Mini of Graeme Cornthwaite/Lynsey Procter.

The Volvo crew did put up the best performance on Regularity 6, but arrived at the Lunch Halt at the Druids Inn in Birchover trailing the leaders by 27 seconds.

Vokes/Vokes were now in a clear third place, but a minute off second place. Their Ginetta G15 was not entirely happy; a broken oil pipe led to the car over heating for the remainder of the event.

Darell Staniforth/Nicky Staniforth had passed Dyas/Taylor during the morning sections, the two crews now being separated by five seconds. Isherwood/Canavan were in sixth, 30 seconds further down, having picked up a maximum one minute penalty on the third regularity.

Regularity 6 was the longest of the day and was a challenging one, with six timing points, the latter part being through quarries in the Stoney Middleton area.

The 2003 British Rally Champion, David Mann, navigated by former HRCR Championship coordinator Ian Doble, was tackling his first historic event. The crew were one of the many to struggle in the quarry, but they survived to bring their MG C home in 24th place overall and second in class.

Willan/Pullan closed the gap to the leaders by five seconds on Regularity 6 and then by another eight on the seventh section. However, they lost six on the final regularity and, with the two crews taking fastest in their categories on the last two tests, back at Walton Lodge, it meant that Crosby/Procter finished the event with a victory margin of 20 seconds.

The Ginetta of Mike Vokes/Matthew Vokes survived for the father and son crew to take third place. Richard Isherwood/Ian Canavan managed to grab fourth place from Darell Staniforth/Nicky Staniforth on Test 7; the two ending the rally separated by six seconds.

The victory secured the HRCR Clubman Navigators’ crown for Ali Procter, but Dan Willan, by taking the runner up spot snatched the Drivers’ title from Paul Crosby.