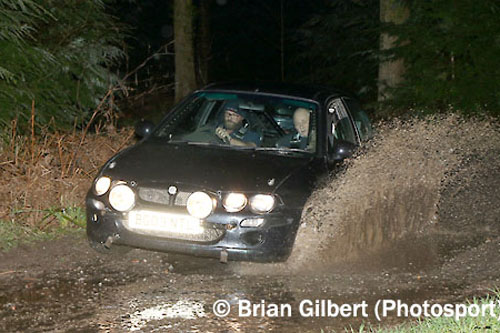 Clerk of the Course: Dave Whittock


Bath Motor Club’s Festival Rally was won in empathic style by the MG ZR of Jamie Turner/Bob Blows. The pairing finished over a minute ahead of the field after many of their rivals fell by the wayside.

It was a tough event, with the combination of an intricate route and the after effects of Storm Doris making it a challenge for all competitors. Dan Darkin/Nick Darkin were fastest over the test that opened proceedings, but they had lost the lead to the eventual winner by the time that their Impreza suffered clutch failure on the third section. Top seeds Paul Tod/David ‘Garth’ Powell went out with engine problems, while gearbox failure accounted for Jamie Jukes/Dale Bowen and a lack of brakes forced out Craig Judd/Gerwyn Barry. None of these made the halfway halt.

Kevin ‘Penclaw’ Jones, this time partnered by Alan James, showed that his Primrose pace wasn’t a fluke by edging out Gavin Rogers/Georgina Clark for the runner up spot at the Finish.

Matt Barker/John Connor took fifth overall and the Expert Class, but would have been in third place if they hadn’t been held up for several minutes by a car that had got stuck in front of them.