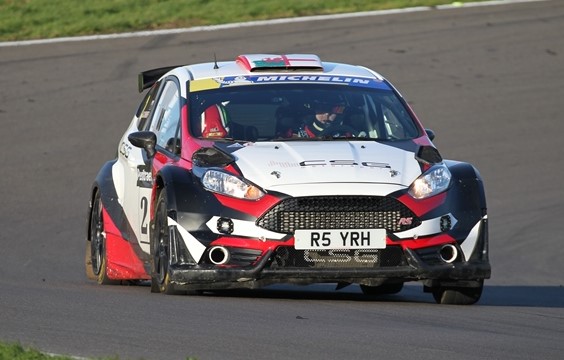 Clerk of the Course: James Robertson


After a CoVid enforced break in 2020, the Glyn Memorial returned in 2021. Based at the Anglesey Circuit, the event enjoyed continued support from long time sponsors, Pentraeth Subaru. The rally followed its now traditional format of 16 stages over two days.

Rob Hughes/Sion Cunniff immediately showed that they were keen to make up for their 2019 event, where a broken drive shaft had denied them victory. They were fastest on Stage One by five seconds. This gave them a lead that they weren’t to lose. They took fastest time on ten stages, taking them to a victory margin of 1m 17s. This made it Anglesey Circuit double; the duo having taken the win on the Enville Stages in July.

Hughes’ dominant performance left the remaining contenders to battle for the runner up spot. The battle was led initially by the Fiesta 2000T of Andy Scott/Laura Connell, they were matched in SS2 by Mark Smith/Tim Nunn, and the Darrian T90 GTR crew moved into second place on SS3.

Scott/Connell saw their hopes of a good result go out the window when they miscalculated their lunch time service break and booked into the SS5 Arrival Control ten minutes early. With the penalty being one minute per minute, they found themselves at the back of the field. They continued, but their rally came to an end when they crashed heavily, without injury, on SS11 on Sunday morning.

Darren Meadows/James Squires (Mitsubishi Evo 4) also found themselves with a hefty penalty after two separate Judge of Facts reported that they had followed an incorrect route on SS1; this gave them a stage maximum.

The BMW 1M of Cliff Evans/Merfyn Williams only got to SS2 before a dropped valve put them out. Williams then went and took a principal marshalling role for the rest of the rally.

Smith/Nunn held on to second place until the end of Day One, however at that point they had Roger Moran/Den Golding (Skoda Fabia R5) just one second behind. The 2007 British Rallycross Champion Ollie O’Donovan, partnered by Marc Fowler, was in fourth place in his Hyundai R5.

A cold and slightly damp conditions greeted competitors at the start of Day Two and O’Donovan made the most of it moving from fourth to second on the first stage of the morning. Moran also got in front of Smith to take third. These three crews battled to the Finish and, although they were never more than a few second apart, the positions didn’t change.

Nigel Worswick/Paula Swinscoe had been battling with brake problems on their Fiesta 2000T throughout Saturday, and, despite a late effort to fix the problem, they decided not to take the start on Sunday.

Scott Moran/Chris Ridge had been just inside the top ten when they crashed out at the top of the circuit on SS14.

Jason Wilson/Lee Wilson (Darrian T90 GTR) had led the 1600cc class by the minute at the end of Saturday, however they missed a loop on SS13; the resultant stage maximum dropped them to third in class at the Finish. The category win went to fellow Darrian crew, Richard Merriman/Emma Todd.

Class B (1400 to 1600cc) saw a clear win for Sion Jones/Gethin Williams. They were already a minute and a half in front of their nearest class rival after SS8, and extended this to almost four minutes at the end.

There was an event long close battle for the win in the small car class (under 1400cc). Chris Johnson/Rob Johnson (Peugeot 205) take the class award, but only by three seconds from Barry Armer/Dafydd Owens (Skoda Felicia).

The Glyn Memorial was a round of the well supported HRCR Mini Sport Cup. Ryan Taylor/Lucy Wilding were the class of the field, winning the category by a minute from Clive King/Anton Bird.

There were ten starters for the Glyn Memorial Junior Stages. It provided two rounds (Day 1 and Day 2) of the Formula 1000 Championship. The Scottish Junior series didn’t attend as CoVid restrictions had led to that championship utilising only events with Scotland.

As in the Inter Club event, there was a Start to Finish leader, in this case the Skoda Citigo of Archie Swinscoe/Barry Young. They finished 44 seconds in front of the field, to give Swinscoe his second successive win on the Glyn.

David Burden/Peter Williams (Citroen C1) had shared fastest time with Swinscoe on SS1, but then fell into a close fight with Lewis Hooper/Sam Bilham (Nissan Micra) for the rest of the rally.

After SS14 the two crews were tied, but on the last two stages they were jumped by the Skoda Citigo of Sam Pattison/Paul Whittaker. This pair had charged on Sunday, in fact a little too much as they damaged the front of the car on SS13. However, they recovered to take the runner up spot on the final test.

Burden/Williams just managed to edge ahead of Hooper/Bilham on the final stage, the two crews still being tied after SS19. 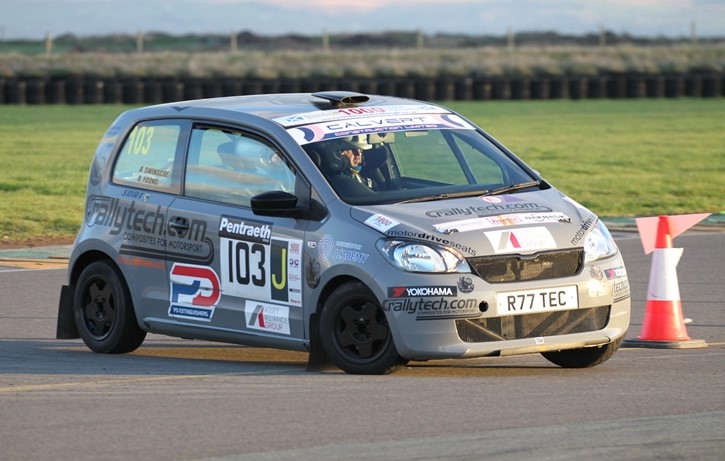