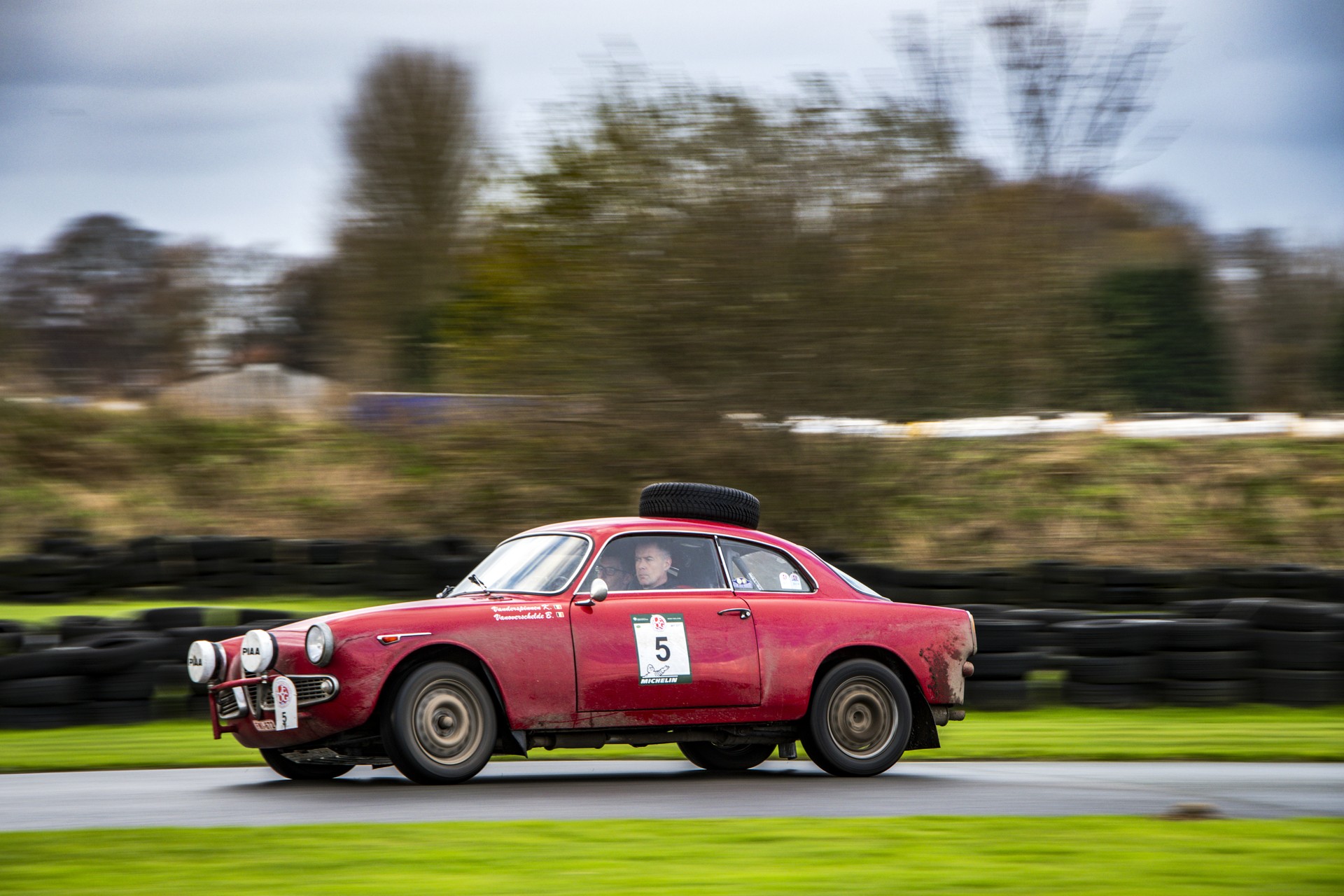 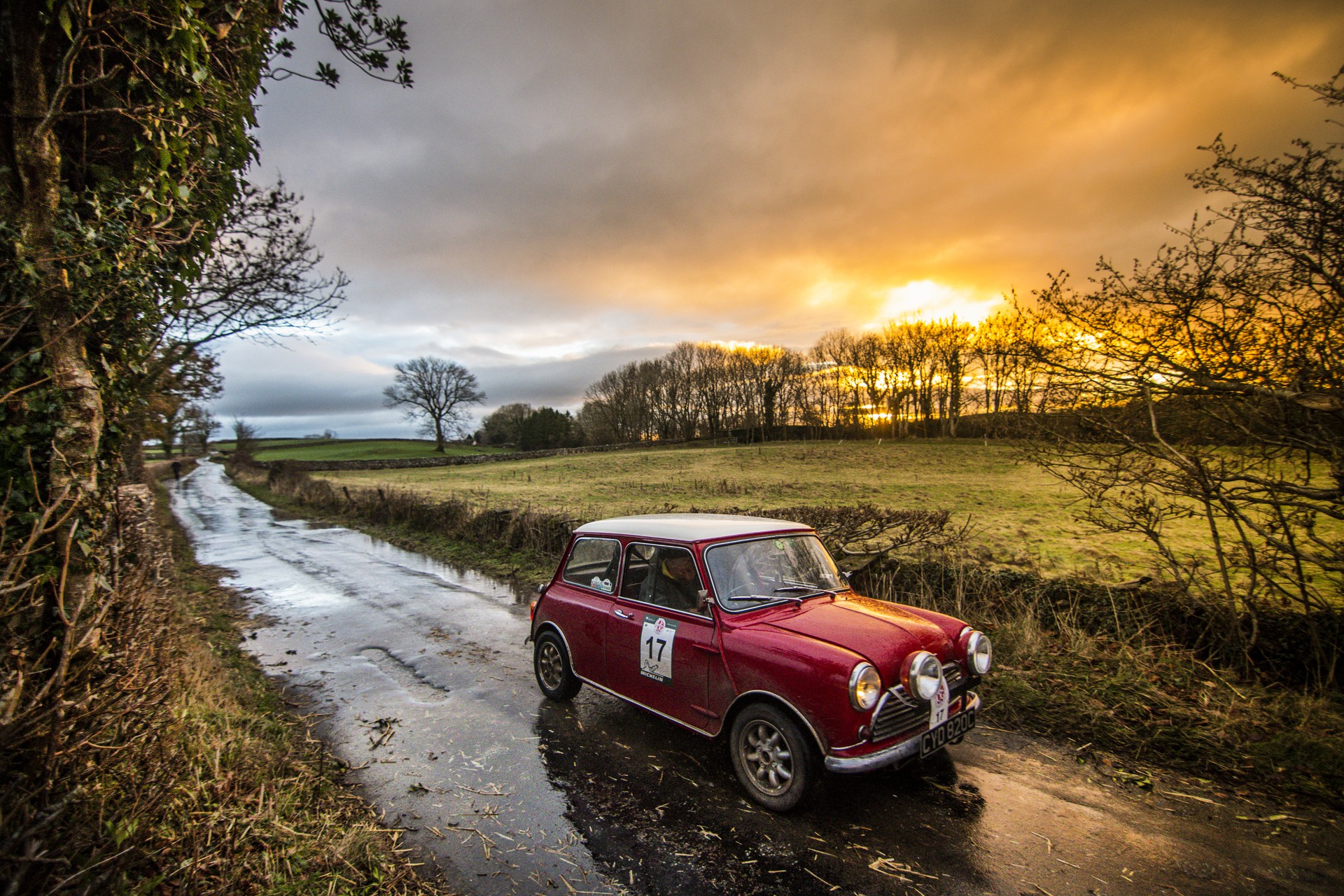 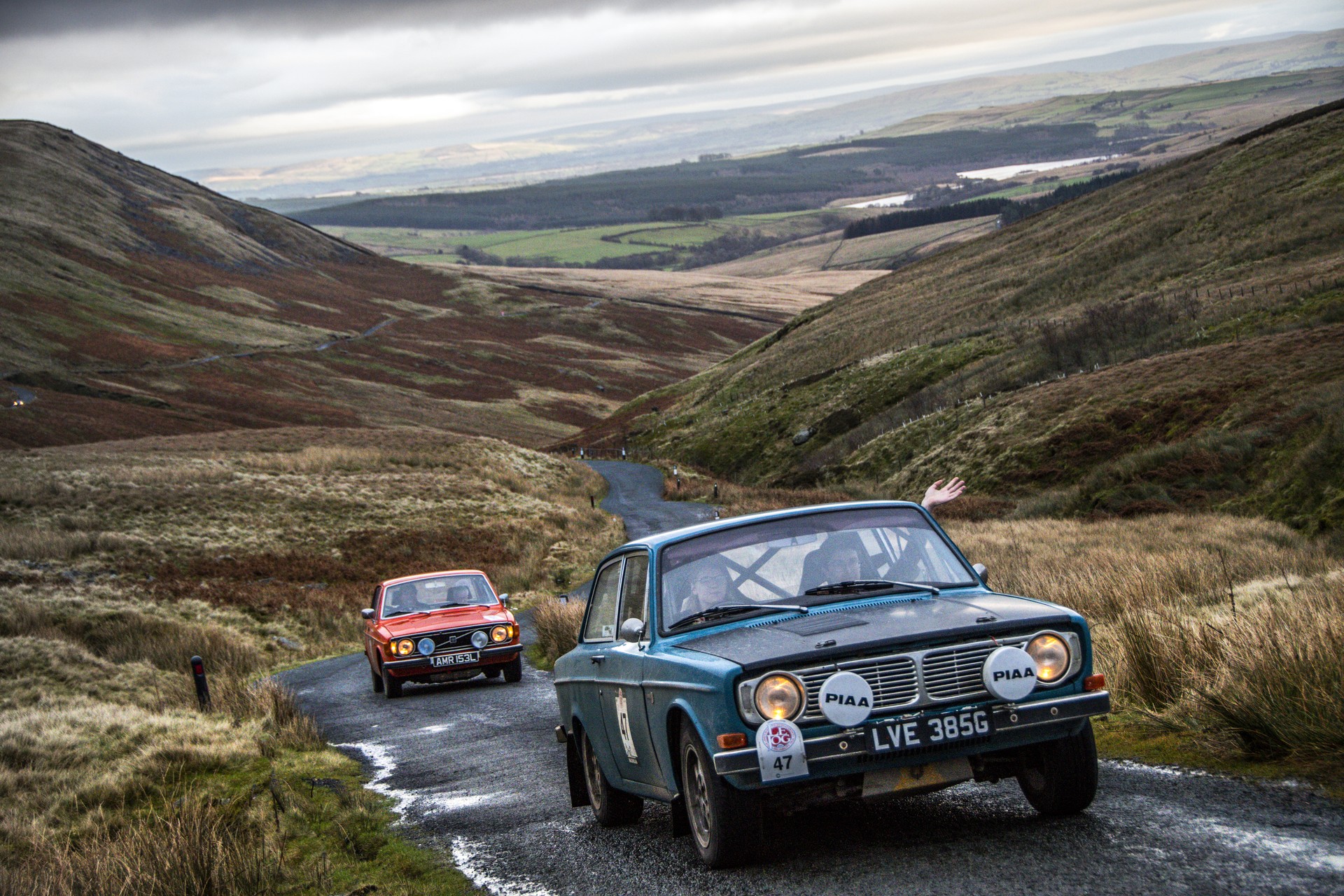 
Despite tighter travel restrictions brought in in response to the Omicron variant, a large number of European crews were amongst the 63 starters for the 26th Le Jog.

Competitors faced a tough challenge over the four days of competition; the organisers had laid out a route which included 18 tests, 30 regularities and the infamous Saturday Night time control section through the lanes of North Wales. Forecasts of gales and wintery conditions added to pre-event excitement.

The premier awards on the Le Jog are Gold Medals; no overall positions are published.

All competitors start on Gold Medal status. However, to remain in contention for a medal, a crew have to visit every control on route. If any timing point, test or route check is missed, the crew disappear from the Medal Table.

Medal points can be lost for various reasons. A single point is lost if a crew are over a minute late at a regularity timing point or late by any amount at a Time Control. A point can also be lost on a test if a car is slower than the fastest in their class by a given number of seconds; the target differs from test to test depending on the test’s length. Two medal points are lost for failing to record a time at an unmanned regularity start; for getting a wrong approach or being adjudged to have completed a test incorrectly.

The loss of a medal point does not remove the crew from the Medal Table.

Competitors who are fourth or lower in the Medal Table for a category are awarded a Blue Riband. As long as a crew visit all the controls, then they will, at the least, get a Riband.

The first car took at the start at 07:30 on Saturday morning, moving immediately into the first test, the traditional run around the First and Last House at Lands End. Three more tests and three regularities had to tackled before crews reached the lunch halt near Tiverton.

Michael Baker/Simon Baker became the first retirement after their Porsche developed a misfire on the third test and they withdrew.

By the lunch halt there were just eight crews on gold medal status; of these, five had yet to lose any medal points. Forty-one crews were still on the medal table, meaning that they had visited all the controls to date.

One test and three further regularities made up the afternoon’s competition and led to the end of Leg One. This was taken at the Hog’s Head near Abergavenny, where crews had a two hour break.

By this point the number of crews on Gold had dropped to six. Amy Henchoz/Niall Frost had been outside the gold medal standard on Test 1/5 at Petroc College in Tiverton; this dropped them to Silver, as their Category 4 rivals, Owen Turner/Andy Ballentyne, kept their perfect score of no medal losses.

In Category 3, Kevin Haselden/Gary Evans (Mini Cooper S) fell from Gold to Silver as they were over a minute late at a timing point on the regularity before the End of Leg halt. Dick Appleton/Mark Appleton (Mini Cooper S) held Gold in the Category having not dropped any medal points.

Also on Gold at the end of the Leg were Simon Mellings/Dan Middle (Honda Accord), however they were to retire on Leg 2.

The first half of the Welsh Leg consisted of six regularities and three tests; all of the latter, plus two regularities were over the military roads of the Epynt Ranges.

These sections did nothing to prevent Vanderspinnen/Vanoverschelde, Kelly/Johnson nor Turner/Ballantyne maintaining their clean sheets. However, Appleton/Appleton were over a minute late at a timing point on Deer’s Leap; they dropped a medal point, which allowed Stephen Owens/Nick Bloxham, who had dropped a point in Cornwall, back from Silver to Gold.

Stephen Owens was hoping to take the HERO-ERA Cup. Paul Bloxidge led the table prior to the Le Jog, but was marshalling in the lanes of Wales rather than competing. This meant that Owens had to score 37 points to take the tile; there were 85 available and the Porsche driver had secured the maximum 15 points on Leg One. Unfortunately, Owens’ challenge was to come to an end on the Time Control section in North-East Wales when he picked up two punctures. He managed to borrow one wheel from a fellow Porsche driver. This allowed him to limp to the Mold control, but he got no further.

Contesting their twentieth Le Jog, Robert McLean/Sue McLean had still been on the medal table when they entered Epynt. However, on the Ranges the exhaust on their Rover P4 broke and they had to cut route to get the problem fixed. They re-joined but later in the event had a front wheel come lose. They continued through to the Finish, although not contesting the competitive sections. They were rewarded at the end by being given the Spirit of the Rally Award.

With the demise of Mellings/Middle, Rod Hanson/Clare Grove moved into Gold for Category 6 in their MG Maestro, but their glory didn’t last long as the car’s alternator failed on the TC section. They got the part rebuilt and returned to the fray at the Leg 4 lunch halt at North Queensferry.

Vanderspinnen/Vanoverschelde lost their first medal point at the final regularity timing point before the TC section. This put them on Silver as Kelly/Johnson stayed on zero.

The toughest section of the event was the 54 mile Time Control section that started at Meifod and, using some classic rallying roads, wound its way to finish with a run over Llantysilio Mountain. The organisers didn’t expect anyone to clean it. They were wrong.

At Time Controls a medal point was lost for any penalty, so the section was to be critical. Despite the wet and windy conditions, Amy Henchoz/Niall Frost got to all 22 TCs well within their minute and took a clear lead in the Category 4 competition; they were now on 1 medal loss, while Turner/Ballantyne were late at seven TCs, which left them on Silver, behind Henchoz/Frost.

In Category 2 Vanderspinnen/Vanoverschelde moved back to Gold as they took second fastest time over the section; they ended on 9 medal points lost. Their nearest rivals were Kelly/Johnson, who were on 12 lost points.

With Owens/Bloxham’s retirement, Appleton/Appleton were on a clear Gold in Category 3; they were on 10 lost medal points. Haselden/Evans and Jayne Wignall/Kevin Savage had been tied for Silver before the TC section, but the former pair dropped two fewer medal points over the TC section to demote the Alfa Romeo crew to Bronze.

Angus McQueen/Mike Cochrane (BMW 323i) had been the only Category 5 crew on the medal table from the start of the Welsh leg. They had lost 25 medal points, but were assured of a gold medal if they could complete the route and visit all the controls.

Previous Gold Medal winners, Richard White/Bernard Northmore, lost the chance to repeat that feat when they missed one of the TCs; this dropped them out of the Medal Table.

It was after 04:00 when the first cars arrived at the leg finish in Mold, so there was little time to sleep before competition recommenced at 10:30 on Sunday morning.

Leg 4 ran through Sunday, taking crews to the overnight halt at Newcastle. It consisted of five regularities and four tests. None had a significant effect on the medal table.

A full night’s rest prepared crews for the 26 hour run through Scotland to John O’Groats. The day opened with three tests near Morpeth. The following regularity, which should have contained six timing points, was curtailed to just one as council workers closed the road for repair work after ten cars had passed.

Two further regularities and a test ran without problems before competitors arrived besides the Firth of Forth at North Queensferry for the lunch halt.

The section saw a change in the Category 3 medal race; Kevin Haselden/Gary Evans missed a timing point in the Blackrig Plantation near Duns. Meanwhile Matt Pearce/Dood Pearce were forced to miss the first regularity. Both crews disappeared from the Medal Table. This all meant that Appleton/Appleton held an 11 medal point lead over Wignall/Savage in the category table.

Henchoz/Frost also lost time in the Blackrig Plantation, but, unlike Haselden/Evans, did find the timing point; they did however drop a medal point and were now on 3 medal points, while Turner/Ballantyne were on 8.

As the route moved north, wintery weather became a factor. The end of the leg was at Coylumbridge, but before that crews had to traverse the Spittal of Glenshee and the Cockbridge to Tomintoul roads. The roads had been ploughed so, although slippery, did not give too much of a challenge and the Medal Table remained unchanged.

After a two hour break, competition restarted with the Loch Ness Monster Regularity. A 65 mile test with 14 timing points had been planned, however a severe frost meant that competitors were stopped following the first timing point when an icy slope became impassable after only a few cars had passed and polished the surface. The section had to be abandoned.

Three more icy regularities were run during the night as competitors moved towards the breakfast halt at Lybster. The conditions meant that even the fastest crews lost medal points as they struggled to keep within a minute of the schedule.

There was drama for Henchoz/Frost as they hit a rock, which damaged the Volvo’s steering. They dropped four medal points, leaving them with a lead of 3 over Turner/Ballantyne.

Even more dramatically, the endurance factor of the event was demonstrated when McQueen/Cochrane, the only Category 5 team on the Medal Table, inexplicably missed to book in at the Passage Control at Brora. The mistake cost them a certain Gold Medal.

There now just remained the final regularity, however it wasn’t an easy run to the Finish. It had seven timing point, plus a Secret Check hidden in a farmyard. None of the leading runners were caught out and all made it to John O’Groats without losing any more medal points.

Vanderspinnen/Vanoverschelde completed the route with the least penalties, beating Turner/Ballantyne by 14 seconds after 1,500 miles of competition.

By taking a Gold Medal as a driver, Amy Henchoz, became only the second person to win a Gold in both seats; she had won a Gold as a navigator in 2018.