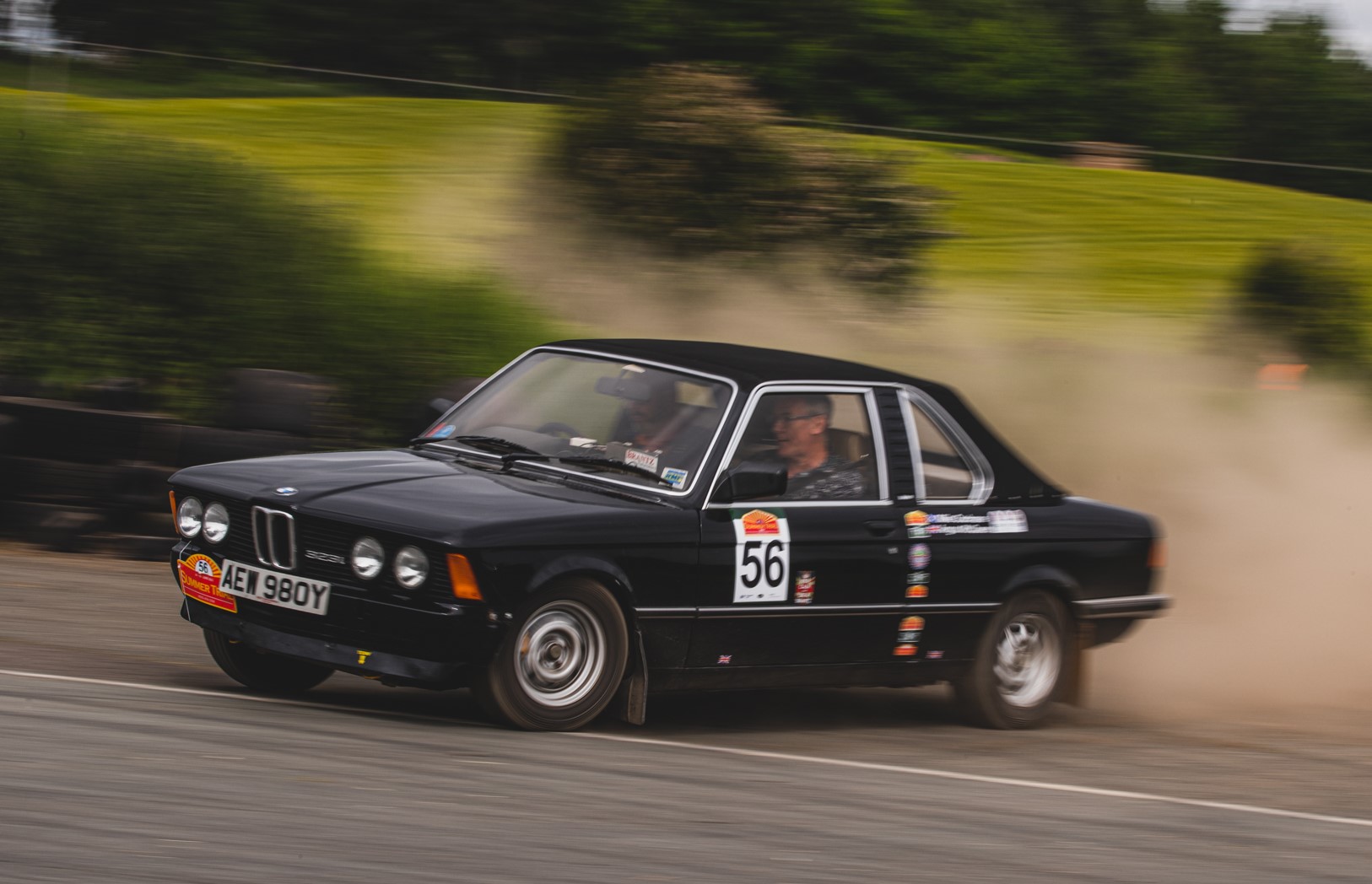 
HERO attracted 55 starters to their three day Summer Trial, which, for the second year, was based in Telford. This base allowed for easy access to the glorious Shropshire lanes. Eighteen regularities and ten tests faced the competitors.

The Joker System was being used - a crew’s largest lateness penalty at a regularity timing point being reduced to 15 seconds. This meant that hold ups due to local traffic wouldn’t spoil a successful run. As usual on HERO events, test penalties would be calculated by the Class Improvement method; the fastest in a class would receive no penalty, while the second would be awarded two seconds and so on, up to a maximum of 10 seconds.

The route on Friday used the area to the north and east of Telford. Starting at lunchtime, the afternoon contained three tests and four regularities. Angus McQueen/Mike Cochrane (BMW 323i), looking for their first rally win after several near misses, were the leaders after one test and one regularity. They were being chased by Paul Bloxidge/Oli Waldock (VW Golf GTi) and Pete Johnson/Jo Johnson (Austin Maestro). As these three crews were in Class 6, tests were crucial.

Patrick Shaw/Christopher Shaw were in trouble on the run out to the first test as the gear stick on their MGB GT broke. They found a local garage that repaired the part, but this delay meant that they missed one test and two regularities.

McQueen/Cochrane still held the lead as crews arrived at the afternoon coffee halt, after Regularity 2. Traffic was an issue for many competitors; Andy Simpson/Roger Bicknell (Mini Clubman GT) had been particularly badly affected and had already used their Joker. The leaders then suffered the same fate at the start of Regularity 3 and dropped down to second behind Bloxidge/Waldock.

On the final regularity of the day, which included a run through the grounds of Chillington Hall, Bloxidge/Waldock picked up six seconds penalties and maintained their lead into the overnight halt. McQueen/Cochrane had only four seconds added to their total, but dropped to third and as a recovering Simpson/Bricknell had two zeros and a one at the three timing points; they took over the runner up spot.

Masters were allowed to enter the event, but weren’t eligible for overall results. There were three starters in this class. All were delayed by two non-competing cars, who had problems reversing, at the end of Regularity 4. This incident triggered the Joker for the crews, as they were all over a minute late at the final timing point. Stephen Owens/Nick Bloxham led the class at the end of the day.

Day Two was a full day of rallying with nine regularities and two tests. The route took crews south towards the Long Mynd and Clee Hill. Lunch was taken at Mortimers Cross.

Simpson/Bricknell were the first of the leaders to hit trouble; they picked up a 10 seconds line fault for failing to stop astride the timing line at the first timing point on the second regularity. Then Bloxidge/Waldock had a nightmare on Regularity 2/3, missing a vital sign post, which was obscured by long grass. This allowed McQueen/Cochrane to retake the lead, a position they were to retain until the Finish.

Also moving up the leader board were winners of the recent Novice Trial, Alistair Leckie/Matt Outhwaite (Saab 900 Turbo); they had climbed up to fourth place by the Day 2 lunch halt.

Despite good performance on the regularities, the day for Bloxidge/Waldock got worse as they were adjudged to have taken a wrong test at Halfpenny Green; this added a further 30 seconds to their total and they fell to fifth place.

By the time that crews arrived back at Telford McQueen/Cochrane had extended their advantage to 46 seconds over Leckie/Outhwaite, who were five seconds ahead of Johnson/Johnson.

In the Masters Category, Bill Cleyndert/Ian Canavan failed to take the start for Day 2 as their Bentley 3/5.3 had developed an engine problem. During Saturday Stuart Andersen/Emily Andersen (Bentley 4¼) took the class lead and finished the day ten seconds ahead of Owens/Bloxham.

Sunday was a frantic half day of rallying, with five regularities and five tests, all in the lanes between Shrewsbury and Oswestry.

McQueen/Cochrane had a nervous day; having missed out on wins at the last moment on more than one occasion. They held the lead at just under a minute until the fourth regularity of the morning, they then picked up 37 seconds of penalties, while their nearest rivals, Leckie/Outhwaite, dropped just ten and closed the gap between them to 26 seconds.

This was however as close as it got; the leaders were fastest in their class on both of the next two tests, while the Saab duo added 16 seconds to their total. The matter was put out of doubt when the crews tackled the final regularity, a sting in the tail where the timing points weren’t positioned at landmarks in the road book. Outhwaite missed this vital instruction and picked up penalties of 34 seconds; this dropped the Saab crew down to fourth place.

The final test saw a dramatic end to their rally for Constant Busch/Alan Pettit; they were in ninth place going into the test, but then had a bottom ball joint break on their Volvo Amazon. This put an end to their event and caused a half hour delay for the cars running behind them.

So Angus McQueen/Mike Cochrane came home to take a popular maiden victory, with McQueen also securing the Test Pilot Award for the best performance over the event’s ten tests.

Paul Bloxidge/Oli Waldock took the runner up spot, 45 seconds behind the winners; the 15 year old navigator picking up the Clockwatchers Award having collected the least number of penalties on the 18 regularities.

Non-competing traffic seemed to have been a particular problem for Andy Simpson/Roger Bricknell, however they had a clear run on Day 3 and put in the best performance of the day to move up from eighth place overnight to third at the Finish.

There was a close battle for the win in the Masters category, but at the end Stuart Andersen/Emily Andersen led Stephen Owens/Nick Bloxham by seven seconds.