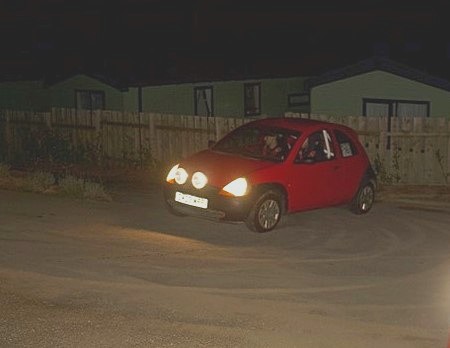 Clerk of the Course: Huw Manion

The novice oriented event had a 75 mile route, all on the Llyn Peninsula. As usual, the Start, halfway halt and Finish were at the small village of Sarn Mellteyrn. The first half used the lanes to the south and west of Sarn, while the second half took crews further up the peninsula, before returning to its base.

Fifty-two cars took the start. Ten of these were Semi-Expert crews, these weren’t eligible for overall awards.

The contenders for the overall award quickly came to the fore. Iwan Jones/Iwan Roberts (Ford Ka) were the fastest of the Novices at STC3, which was situated near Castell Caeron. However, Guto Lewis Thomas/Owain Llyr Thomas (VW Golf), using their extensive local knowledge, moved to the front at the next control timed to the second; they now led Jones/Roberts by 18 seconds.

The Golf of Adam Jones/Steffan Kelliher was stopped by electrical problems for over 20 minutes on the opening section. Their speed on other sections suggested that they might have been able to challenge for the overall win, but, unfortunately, their early problems meant that they were over their time limit at the the halfway Main Control.

The route went as far as the outskirts of Aberdaron before returning to Sarn for the mid-point halt. By this point Jones/Thomas had extended their lead to 33 seconds, with a total of exactly 2 minutes. Jones/Roberts were in a secure second place. From a start number of 31, Gwion Huw Jones/Iolo Hughes had put their Nissan Micra into third place, 57 seconds off the lead.

Chris Hedley/Carwyn Roberts (Ford Fiesta ST) would have been in contention for a top place, but they had picked up a fail after booking in early at a cleanable time control on the first section of the event.

The fastest crew of the night were the Semi-Experts Dafydd Davies/Gareth Davies; they had dropped time at four controls, but never more than a few seconds and they arrived back at Sarn with a total of 33 seconds. They were 1m 19s ahead of top seeds, Alan Parry/Timothy Parry (Ford Escort).

Remarkably most of the remaining Semi-Experts had retired; just four remained in the competition by MC2. Trystan Leyshon/Dafydd Jones (Ford Focus) had gone out with a broken clutch. The same problem stopped the Escort of Robart Harvey Evans/Robin Harvey Evans. Meanwhile a broken throttle cable had accounted for the Saxo of Carwyn Griffith/Kieran Williams.

The battle for the overall win took a dramatic turn just after the restart. The clear leaders, Thomas/Thomas suffered a broken drive shaft and they were out. Iwan Jones/Iwan Roberts took over a lead that they weren’t to lose.

Other than the erstwhile leader’s retirement, there was little change in the top places in the second half. Jones/Hughes brought their Micra home in the runner up spot; they had narrowed the gap to the leaders slightly, but were still 19 seconds behind at the Finish.

The 2016 wining navigator, Jamie Ollerenshaw, drove on this occasion and, with Harry Jones on the maps, took third place in his Peugeot 206.

Llyr Williams/Jamie Atherton had been in seventh place at the mid-point halt, but retired in the second half when the alternator failed on their Saxo.

The last car away, the Mazda MX5 of Ceri Hicks/Dewi Jones, led the Beginners Class from near the start and came home to take the category win by almost four minutes.

Dafydd Davies/Gareth Davies continued their superb performance at the front of the field, dropping time at just two controls in the second half and taking the Semi-Expert Class award by over a minute from Alan Parry/Timothy Parry.