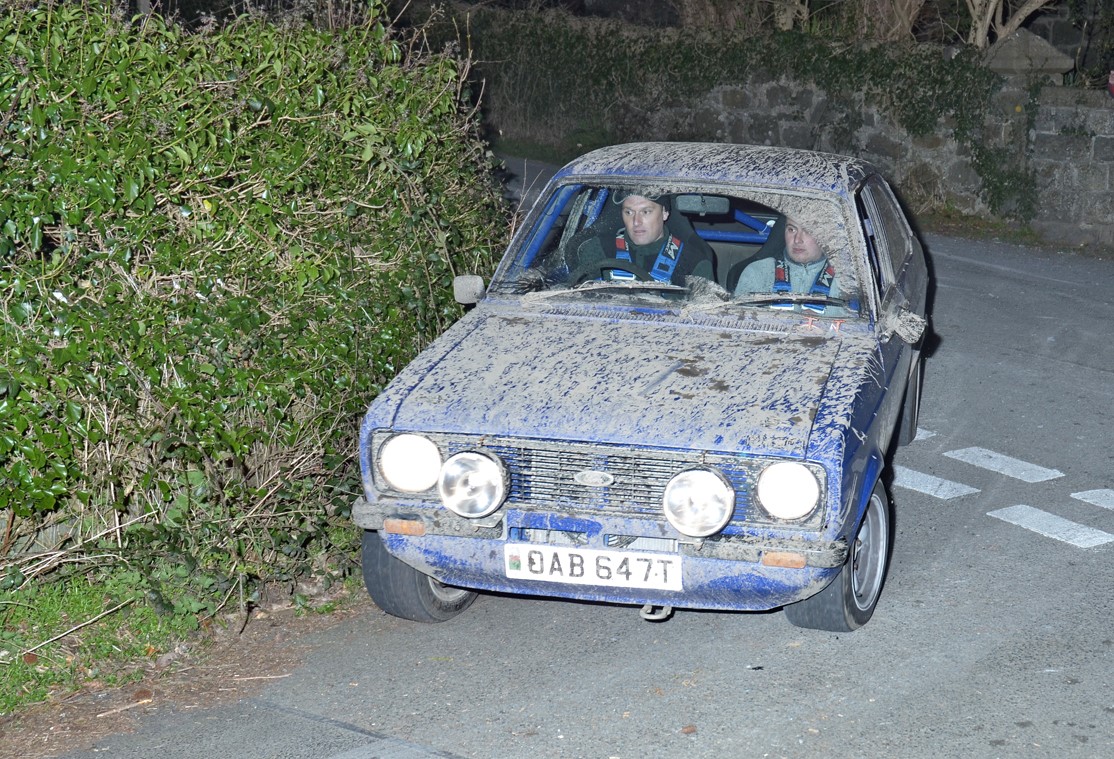 
Despite deciding to withdraw from the Welsh Road Rally Championship, the Rali Llyn attracted 86 starters for its 110 mile challenge around the tight lanes of the North Wales peninsula.

The event started and finished at the Glasfryn kart track near Y Ffor, and competitive motoring started immediately outside the circuit. The first section finishing just outside Llanystumdwy. The first time pairing of Arwel ‘Sbidi’ Hughes-Jones/Dafydd-Sion Lloyd were fastest by six seconds from Steven John Williams/Paul Roberts over it.

The second section, which took the route north and skirted Mynydd Cennin, was cleaned by most of the top crews, although George Williams/Cadog Davies dropped 11 seconds.

There were a number of significant retirements in these early stages. The 2018 winners Carwyn Evans/Dylan John Williams suffered a head gasket failure on their Escort, while a broken shaft brough the similar car of Iwan Jones/Steven Roberts to a halt. One of the few non-Escorts in the top 20 starting positions, the Peugeot 206 of Dewi Williams/Ianto Fon Jones, was also added to the non-finishers list when its clutch failed.

Steven John Williams/Paul Roberts moved into the lead on the third section, which used the maze of lanes through Nasareth. However, they were tied on penalties with Gavin Edwards/Daniel Jones, who had been fastest over the test. Hughes-Jones/Lloyd were nine seconds further back.

The fourth section started at Penygroes and ran east of Pontllyfni to finish at Aberdesach. Williams/Roberts stormed through it and took more than 20 second out of all their rivals, to secure a clear lead. Edwards/Jones held on two second place, but were only two seconds ahead of Hughes-Jones/Lloyd.

The first half ended with a run past Bwlch Mawr and, once again, all runners dropped time. George Williams/Cadog Davies were fastest, bringing them back into contention with the top three crews.

At the petrol halt in Pwllheli Williams/Roberts held a lead of 16 seconds over Hughes-Jones/Lloyd, while Edwards/Jones were six seconds further back in third. Williams/Davies were now only seven seconds behind Edwards/Jones.

Top seeds, Kevin Kerr/Huw Rhys Manion, led the rest of the field in fifth, but were over a minute away from the lead. Meanwhile Mark ‘GT’ Roberts/Dale Furniss in their Golf held sixth place and were the only non-Escort in top twelve.

The Expert Class was led by Adam Jones/Iwan Williams, who were in eighth place overall and nine seconds ahead of category rivals, Gwynfor Jones/Chris Evans. Unfortunately, Jones/Williams were to retire in the second half.

Meanwhile Thomas Jones Thomas/Gwilym Wyn Evans had a lead of almost two minutes in the Semi-Expert Class. They extended this advantage to four minutes by the Finish.

There was a tighter battle in the Novice Class where Meilir Llwyd Huws/Guto Sion Williams led Sian Elen/Eleri Jones and Dafydd Huw Jones/Carwyn Evans. The three crews were covered by 18 seconds. Elen/Jones overhauled Huws/Williams in the second half to take the class win at the end.

Richard Jerman/Nick Bloxham were well down the order after they had collected a puncture and had to change it. They were then further delayed by being held up by other, slower, competing cars.

The new partnership of Hughes-Jones/Lloyd had begun to jell and they cut the deficit to the leaders by half as they cleaned the opening section of the second half. They then got three seconds closer on the next section, which finished near Hendre Penprys.

They finally hit the front as they were fastest again at STC24, which was near Medryn Castle. At this point they held a 13 second advantage over Steven John Williams/Paul Roberts, who were 20 seconds ahead of Gavin Edwards/Daniel Jones.

As the route moved down the peninsula towards Sarn Mellteyrn the erstwhile leaders, Williams/Roberts, started to suffer gearbox problems on their Escort. This meant that as Hughes-Jones/Lloyd pulled away towards victory, Williams/Roberts fell into the clutches of Edwards/Jones and were passed for the runner up spot on the final section.

Kevin Kerr/Huw Rhys Manion managed to pass George Williams/Cadog Davies for fourth place, while Mark ‘GT’ Roberts/Dale Furniss were the only non-Escort in the top ten in sixth place.

It had been an excellent, but tough event; 61 of the 86 starters had made it to Petrol, while 52 reached the Finish.